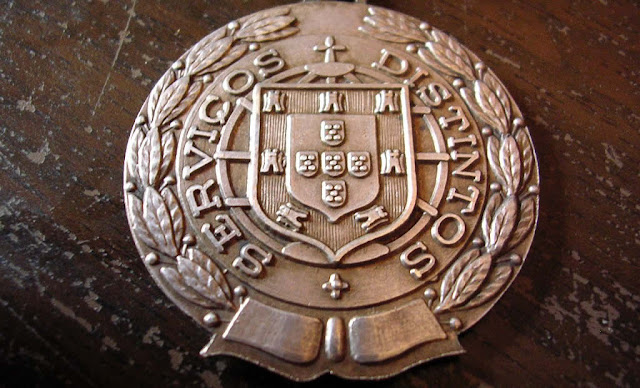 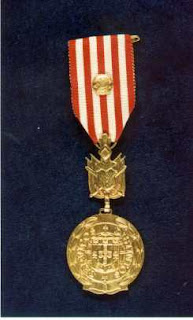 Created in October 2, 1863, by decree of the Secretary of State for the Affairs of War, initially with 2 degrees (Gold and Silver), and since 1919 with 3 (Gold, Silver and Copper), it awards “relevant and outstanding services of a military nature, or notable acts of any nature connected with the military institution, from which results, in either cases, honor and brilliance for the Fatherland or for the institution”.
When it was created, in 1863, this class of the Military Medal was named GOOD SERVICES, name which would be substituted in 1946 by DISTINGUISHED SERVICES.

OBVERSE: National emblem, encircled with the legend «SERVIÇOS DISTINTOS» (Distinguished Services), in uppercase elzevir font, encircled in turn by a laurel wreath; on top, a trophy;


REVERSE: on the forground a national banner surrounded by 2 oakleafs, with the superimposed figured, half body, of a warrior from the time of the foundation of the nationality (XII Century), holding an ancient sword in his right hand, and a shield on his left, protecting his left torax; this is surrounded by the legend «PARA SERVIR-VOS BRAÇO ÀS ARMAS FEITO» (To Serve you, Arm to Arms), in uppercase elzevir font, encircled in turn by a laurel wreath; on top, a trophy.

Above: Military Order of Aviz