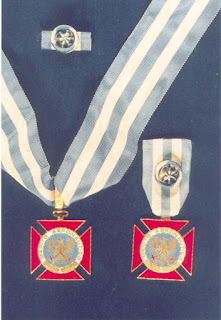 The MEDAL OF AERONAUTICAL MERIT, created in October, 11th, 1985, awards military and civilian personnel, national or foreign, who reveal, technically and professionally, high competence, extraordinary performance and relevant personal qualities, significantly contributing to the efficiency, prestige and fulfilment of the mission of the Portuguese Air Force.

DESIGN
OBVERSE: aeronautical merit cross, formed by a cross of Christ, of equal length, colored red, with the Air Force eagle in the center on blue, encircled by a golden laurel with the legend: «MÉRITO AERONÁUTICO» (AERONAUTICAL MERIT)
REVERSE: Same form as the obverse, but in the center, over blue, the golden “passarola” of Father Bartolomeu de Gusmão, and legend “EX MERO MOTU”.