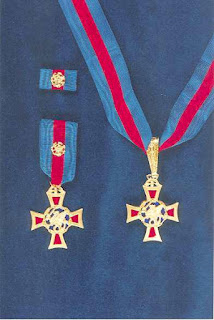 DESIGN
OBVERSE: a St. George's cross in red, embroidered in gold, and a FLYING sea lion, bearing a sword, and encircled by a chain of 14 ELOS, 7 seen in profile, and 7 on top, all in gold;
REVERSE: plain.