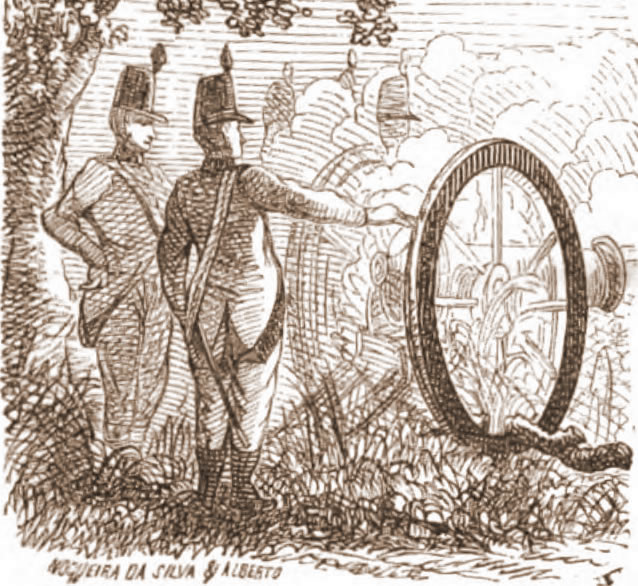 Between 10 and 11 December of 1795, the Portuguese troops who took part in the Roussillon campaign arrived at the port of Lisbon, in Belém. After the separate peace negotiated between Spain and France, through the Treaty of Basel, signed July 22 that year - leaving Portugal out, our soldiers finally returned home. They were the Auxiliary Army to the Spanish Crown (Exército Auxiliador), five thousand men strong, infantry and artillery, commanded by Lieutenant General John Forbes, sent by Portugal to fight in Roussillon and Catalonia.

In the Quadros Navaes (1869), Joaquim Soares gives us a happy scene as always happens when soldiers return home. The Prince Regent D. John, who was at the time coming from Queluz to the Necessidades, knowing the arrival of some of the vessels to Lisbon, took the decision to embark on the pier of Belém to meet them. The next day, the prince made a point to watch from the balcony of the Palace of Belém, with his wife, Princess D. Carlota Joaquina, the landing of the brave. These, as steped back on home soil, began to form. Completing the scene, and as stated Joaquim Soares, "it was a tender scene to see why such a large crowd of people was in the place [...], and every street where the troops were to pass, to show their consolation in seeing restored relatives and friends to the country".

The Roussillon campaign, or War of the Pyrenees, as it was also known, was one of the conflicts of the First Coalition War call, which took place in various theaters between 1792 and 1797. The Portuguese participation in this conflict became inevitable in view of a remarkable event: the execution of king Louis XVI, in the place de la Concorde, at 10:20 on 21 January 1793. Although it has not opted for a direct participation, Portugal sent a force to aid Spain in the theater of Pyrenees, strong of 5000 men, the same as now returned.

Six days after these endearing scenes of the reception of Portuguese troops,  in the Queluz Palace, the first phaleristics insignia (ie, distinction) intended to commemorate the participation of Portuguese soldiers in a campaign was born.

On 17 December 1795, the Prince Regent D. John signed two decrees on establishing the 'Granada' and the 'Peça', to reward both arms who fought in the Roussillon  and Catalonia fields; effectively the first 'medal' campaigns in the Armed Forces. Notwithstanding previous commemmorative pieces, these was the first to be designed to be used by the soldiers of all classes, from the generals to the enlisted.

The Granada, or Grenade, gold for officers, silver for cadets, in white silk for the sergeants and white wool for soldiers, was intended to be used embroidered on the right arm and consisted of a drawn grenade with the objective to distinguish all infantry who participated in the campaign. It was the same type of grenade that was always identified the grenadiers, traditionally the elite of the infantry regiments.


The Peça, or artillery Piece, silver for officers and cadets, white silk for the sergeants and wool of the same color to the squares, to use also embroidered on the right arm, rewarded turn all artillery soldiers. Despite the decree stipulating that the piece should be silver for all officers, we can see the image of Brigadier Jorge Frederico Lecor, which have been in the habit, official or otherwise, to use the emblem in gold, matching the gold used in the Granada from general officers of infantry.

So begins the history of Portuguese campaign medals, still in the eighteenth century, celebrating the exploits of Portuguese soldiers and they carried on distinction and honoured their symbols.